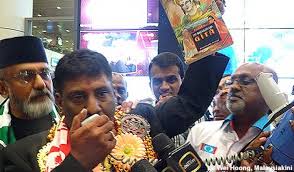 The death of private investigator, Balasubramaniam A/l Perumal due to heart attack which is still mourned by his relatives. Some of them are blaming PR for pushing him to be active in the political world.

If we are to consider the facts, those who have heart issues should get a lot of rest and light exercise.
If PR do care and they did not push Bala and gave him more chance to rest until the end of his heart bypass surgery which has already been set, there might be a probability that his death can be avoided.
However, everything has been fated and we should all convey our condolence to his family.

And now, his death is still being discussed by a few in PR when some thought that the action of bringing Bala back to Malaysia is just a waste for PR.

Such opinion is also shared by a pro-PR website, suarapakatanrakyat.com which in its article, "Bringing Bala Home Is A Disaster For Pakatan Rakyat".

According to the website, Bala was a police officer and he has bad record when he was in service for RMP. Few of his bad record include kidnapping (Kidnapping Act) and slapping a civilian (Indecent Act).
Based on those bad record, the portal thinks that it has given PR a bad image, thus, affecting the public trust on PR's campaign regarding Altantuya's issue.

The worry expressed by the portal might be right. No one would want to believe stories that came from police officers with bad record.

Besides, up to his death, Bala still refuse to return Razak Baginda's RM50,000 which was supposed to be handed to Altantuya, which Bala took.

And we still have not considered Bala's credibility as he kept on changing his statutory declaration (SD) which contradicts one another on the same issue.

With the bad record above, it would be hard for the public to really care about what Bala said. Despite that, it is a little too late for suarapakatanrakyat.com to warn their favorite party
Posted by Unknown at 3/28/2013 01:00:00 PTG
E-melkan IniBlogThis!Kongsi ke TwitterKongsi ke FacebookKongsi ke Pinterest