PKR IS DESPERATE, RESORT TO POLITICAL VIOLENCE TO CREATE FEAR 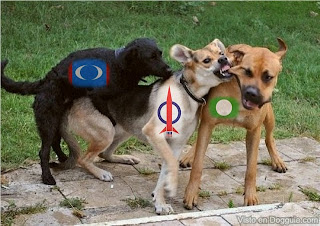 POLITICAL violence is now seeping in Malaysia’s political scene and it is growing into a culture…for the opposition of course…especially PKR as more and more of the party’s leaders particularly Anwar Ibrahim’s skeletons being revealed.

This culture began in 1998 when Anwar was expelled from the Cabinet where he began his street demonstrations and since then, Kuala Lumpur faces various demonstrations by NGOs aligned to him.
The recent political violence, latest at Kota Kinabalu airport as depicted in the U-tube by Rocky’s Bru reflected the desperation PKR is at present.

PKR has been very aggressive in digging and exposing the ruling party’s weaknesses and particularly Prime Minister Najib Tun Abdul Razak with their make-believed stories being repeated with different actors and different places.

PKR aggressive onslaught has taken a backseat as Malaysians at large began to see the truths and this has put the party in an awkward position as credibility took a downward slide.

Wanting to remain relevant and the need to be regarded as strong and still influential, the party embarks on ‘political violence’ and of  course as usual, always blame Umno for starting it and the irony is that the party manages to convince many.

PKR which began as a group that embarked on street demonstrations has developed into a political party but without philosophies and concepts thus still practicing street demonstration and violence as its culture.
The party leaders, who are deep in scandals and have a history of street demonstrations, are regarded as JOKERS by the DAP and not credible at all by PAS, are ‘working overtime’ to pre-empt moves by BN.
BN’s responses in rebutting all the make-believed allegations done systematically worry PKR as thinking voters are now distancing themselves from the party, even the party’s members and supporters are running away as fast as they can.

The situation has made PKR desperate and pressured and the only way now, since all else failed, is political violence which can trigger fear and restlessness among the public.

This violence is expected to occur even after polling and the height of this will be on polling day – expect much violence when voters queue up to vote.

The party leaders know Malaysian voters are now looking for ‘real and fulfilling’ future rather than rhetoric and ‘mad approaches’ that have no logical basis, only talks and dreams.
Thus, the political gangsterism is the answer to the party’s desperation – if you can’t beat them, do not join them but scare them – that seems to be the motto now.
Posted by Unknown at 3/28/2013 12:00:00 PTG
E-melkan IniBlogThis!Kongsi ke TwitterKongsi ke FacebookKongsi ke Pinterest