The Sulu Princess and The Chameleon 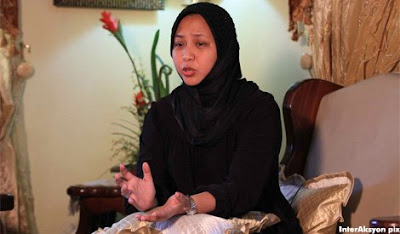 Once upon a time, there lived a Princess called Jacel, in a pathetic little hut, in a small village in Southern Phillipines.   The princess has always cursed her hard life – a life harder than most ordinary villagers in the Land Below The Wind, which used to belong to her family.

She blames her great-great grandfathers for giving up the land at a pathetic cost of RM5000 a year but she never sees of a way of getting it back.  Not until a chameleon named Anwar Ibrahim came along and offered some hope of regaining the family’s throne.

She dreams of living a real-princess life after getting back the throne, but things turned out to be better with this magic chameleon.  Princess Jacel suddenly find herself already living a princess life, flying on a jet-plane, having all kinds of gadgets that she didn’t even dare to dream before and got introduced to the amazing world of the….‘Twitter!’

The excitement was just too much to handle that she couldn’t wait to announce to the world that she, is a Princess - the Princess of Sulu, the heir of the rightful ruler of the Land Below the Wind!

But then, she went and showed the world the ultimate proof that her family doesn’t have the rights to land.  She showed us a Lease Agreement signed at 22nd January 1878 read:

"GRANT BY THE SULTAN OF SULU OF A PERMANENT LEASE COVERING HIS LANDS AND TERRITORIES ON THE ISLAND OF BORNEO DATED JANUARY 22, 1878"  to Baron von Overbeck the ‘real’ ruler of Sabah at the time.  Sabah then became part of Malaysia, and Malaysia continues to comply with what has been agreed.

We don’t know which part of the word ‘permanent’ that the Princess doesn’t understand.   But considering her hard life and the DNA passed by her great-grandfathers, who had willingly given up a big piece land for a little amount of money, I think we should not be so hard on her.

However, not being hard on her seems to be unfair, considering what her men has done to our policemen and soldiers and for causing trauma to the villagers of Sabah and for the trouble that she has caused our government plus the affect on Malaysia’s image and economy.

What is worse is that this Princess is starting to sound more like a PKR member, than a Princess of some non-existence kingdom.

In a press conference, she called the public not to believe the conspiracy theory being peddled by the government and that Najib and his UMNO are gearing up for Malaysia’s election this month.

She also said that the conspiracy angle is “purely for political exigency and popularity. This issue to them is not important, especially on election time in Malaysia”.

She added “Today, the imaginary conspiracy was propagated through text messaging to divert attention away from the true issue. The conspiracy theory is an insult to the Filipino people and to the sultanate of Sulu, more so to the Raja Muda (Agbimuddin) and his people.”

She almost sounds like Nurul Izzah if  not Tian Chua or Anwar himself.  We can almost expect that she would continue saying that the whole incident was a slander to bring down her father!

The Sabahans are only so lucky that the Sulu Sultan had given up the land or they would find their lives in the hands of a Sultan who thinks that bloodshed is good for popularity, especially with the election approaching.

Malaysians are very peaceful people and that’s why this country remains peaceful despite unending attempts by the Opposition to create chaos.  We let the Sulus come and go freely, believing that they too, are peaceful people.  It is just natural for Malaysians, when looking at the Sulus, even Jacel herself, that the first thing that triggered our mind, was ‘pity’.  These ‘good’ people of Sulu, they look like us, they are of the same religion, and then our hearts melted.

But thanks to Anwar the chameleon that we now are able to see that the Sulus are not as good, in fact are savages, brutal and cold-blooded.  Religion is only by the ‘tudung’ worn by Jacel but it was proven in the battle, that they actually worship the satan.

The chameleon has obviously succeeded in misleading or cheated the Sulus into giving up their lives for his sake.  And for that, the Sulus have obviously lost everything.

Even without a throne, the Sulus royalties have proven themselves to be ever willing to be a tool to anyone, and risk their peoples’ lives for easy money.

Jacel may have some gadgets, a twitter account, and flies on jet-planes, stays in hotel suites for awhile but that’s all there is to it.  In no time, when Sabah is no longer an issue for the Chameleon, the Sulus will be forgotten, the terrorists would be wiped off.  Jacel will go back to being a nobody, as she actually is.

Even then, nobody knows whether Jacel is the real supposed-princess.  We know that there are disputes over the matter of heirs and heiress of the Sulu throne and nobody can even prove who is the right person to claim the throne.    But even if somebody can, the problem is, there is no throne!

How could Jacel call herself a Princess when the there is no kingdom to rule?  As hard and painful as it is, it is the truth that Anwar is just a chameleon, not a wizard who can grant wishes and fulfill dreams.