Another thing which we need to process in order to understand Malaysian opposition is that every mistake which is done by Barisan Nasional leaders would be okay of it is done by their own leaders. For example, it is okay for Nik Aziz to be in power until the day he dies, but it is wrong for Tun Mahathir to stay as Prime Minister any longer, or for Tan Sri Abdul Taib Mahmud to keep on leading Sarawak for more than 30 years. 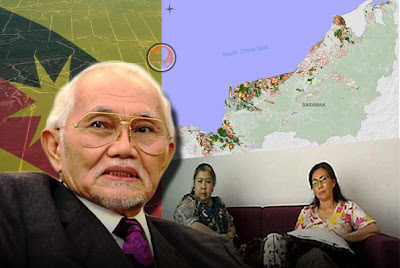 Tun Mahathir has retired, leaving Malaysia on top, with highest respect, and admired by the world. And Taib Mahmud still in power, has proven continuous commitment and his abilities to develop Sarawak other than ensuring the peace and well-being of its rakyat.

However, Nik Aziz still refuse to retire even though he does not fulfil his tasks, other than politics, constant ceramah as well as insulting people, for the past 20 years.
Even then, the opposition never questioned him about why more than 10,000 acres of land were given to DAP, about why Kelantan is still undeveloped, what happens to the logging industry, or why can't the water supply issue be solved or why does moral issue kept on getting worse? Instead, they only look for ways to tarnish Tan Sri Taib Mahmud's image even though rakyat of Sarawak are living in peace and prosperous.
It is clear, the problem with the opposition is that they do not care about rakyat, all the care is about the power which Taib Mahmud has and that they are hungry for it. It is not too much to say that Taib Mahmud is one of Barisan Nasional's strongest defence, resisting various forms of attacks for all these years.

Considering that GE is coming close, it is not surprising why the attacks are coming back in. This time around, it is not from the outside, it is from the inside, from Taib Mahmud's cousin, Norlia Rahman, as a video showing a meeting about a project involving foreign direct investment to describe as if there are elements of corruption from Taib's side. The video was said that it was taken secretly, without being realized by the characters in it.

The thing which this videographer might have missed is that , this video can easily be argued by looking at Norlia's background and understanding her motive. Norlia is the daughter of Rahman Yakub who is Taib Mahmud's uncle. He was also Sarawak's former Chief Minister and Governor.

The vengeance which Norlia's family has against Taib Mahmud began as soon as Taib Mahmud replaced her father as Chief Minister back in 1981. Then, Rahman Yakub was listed to have 70%  from logging license at Lembahan Mewah via his daughters, while another 30% was owned by Datuk Tajang Laing, ADUN Belaga. Taib Mahmud then revoked 30 of logging licenses involving Abdul Rahman and claimed that his uncle had awarded 1.25 hectare logging concession worth RM22.5 billion to himself, his family and relatives.
From there, the feud between this family becomes bigger where in 1985, Taib once again offended Rahman by sacking him from the post of Yang diPertua Negeri.

Rahman had his chance to attack in 1987 which is known as ‘Ming Court Affairs 1987’ by raising signatures from ADUN and led a group of Sarawak politicians who were disappointed with Sarawak National Party (SNAP) and PBDS to gather at Ming Court Hotel, Kuala Lumpur to urge on the proposal that they have lost their confidence in Taib's leadership. However, Taib managed to detect the conspiracy a lot earlier and he called for an emergency election and he barely won with 28 out of 48 seats which later adds to eight more seats from defected ADUN.

If Taib Mahmud was unsure that his actions had offended his uncle was right, there is no way that he would have settled this issue through election.
It seems like Taib Mahmud's cousin, Norlia do not have the guts to face her cousin in the right channel. Instead, she chooses to act, all to tarnish Taib;s image to public.
If she speaks the truth, why the act?

Supporting Norlia's vengeance against Taib would be Norliz, the wife of former SNAP Vice President, Datuk Justin Jinggut who is promoting himself to the highest place for PKR Sarawak. Datuk Justin is also known to have close ties with Anwar Ibrahim.
See, isn't it easy to question the video?

However, if we are rational, we would not have to go that far to see the genuineness of the video. This is because, the act and situation of the video seem irrational. There is no way such controversial big business deal would be discussed with a stranger in such small hotel room, and friendly. Just look at how relaxed the actors were as they mention the details between one person and another, including the internal issues of Taib's family.

In short, the body language, script and characters in the video clearly showed that this is a planned.
That is why, our message to the opposition, just for once, find real issues to go against BN. Enough with your ridiculous acts because it is just sickening.
For once, face BN like real men.
Posted by Unknown at 3/26/2013 07:30:00 PG
E-melkan IniBlogThis!Kongsi ke TwitterKongsi ke FacebookKongsi ke Pinterest