Nurul Nuha Used By Anwar To Cover For His Mistakes 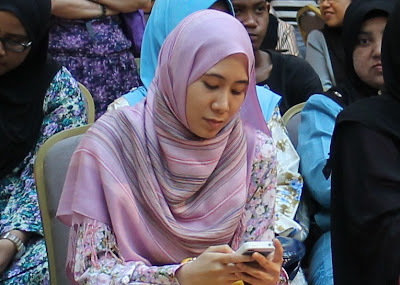 Parti Keadilan Rakyat (PKR) is officially getting closer to become a Family Members Party Sdn. Bhd. as rumors say that another one of Anwar's children, Nurul Nuha will be contesting in Permatang Pauh for the coming GE13.

Nurul Nuha is chosen by Anwar after receiving report saying that the proposed candidate, PKR Perak's Chairman, Dr. Muhammad Nur Manuty, is rejected by voters there, Anwar then set his daughter's name there to ensure that the influence of his family stays at the constituency.

Anwar's father, Datuk Ibrahim Abd. Rahman was also an MP there before Anwar, so, perhaps the candidacy of Nurul Nuha is seen as something sentimental or personal for their family.

Why would he choose Nurul Nuha who is still young and clearly inexperienced? Why not place Nurul Izzah considering that Izzah is sick of flying around looking for constituencies because she is rejected at her own place. However, it is said that she had to stay at her constituency because that is the safest place for her.
The answer to why Nuha instead of Nurul Izzah is because Nuha is still 'clean', which could restore the image of her father, mother and sister which all have been tarnished with the image of traitor, actors and adulterer.

Nurul Izzah, is known to have insulted most Malays and Muslims. Her tendency of being a liberal is so obvious and her actions in giving her views on religion and allowing Muslims to convert to other religions was a big mistake which can never be repaired. Her refusal to apologize for her mistake, and only twist around with her own statement to repair the issue has entirely tarnished her image.
Nurul Izzah also has shown her betrayal against her own country.

Recently, as the Lahad Datu incident brought Malaysians together and fired up their patriotism and as we pray for the safety of our national heroes, Nurul Izzah once again made a statement which showed the world how she does not share the same spirit and sentiment which Malaysians have and she did not know anything about our national security  force.

Wan Azizah in the other hand, is only an old puppet. Anwar only uses her whenever he needs her. All she has to do is to show that Anwar is a good father and a loyal husband. Other than that, Azizah does not bring any influence, all she does is tear up and smile, that is it.

So, it is hoped that Nurul Nuha could provide a fresh image for this wrecked family. As a newcomer, Nurul Nuha still has not make any mistakes. Nothing bad can be said about her, this would be a bit challenging for her opponent in Permatang Pauh. With the family legacy in her hands, it is not impossible for Nuha to win.
The only setback for Nuha is the clear nepotism image within PKR. Besides that, because she is still yet to have any records, Nuha needs to convince people of Permatang Pauh that she is capable to really perform her tasks instead of just playing politics like her father, mother and sister.

Whatever it is, if Permatang Pauh voters did reject UMNO because they were fooled by PR's claim saying that UMNO practices nepotism and cronyism, they should reject PKR if Nurul Nuha becomes a candidate for the coming GE.
Posted by Unknown at 3/28/2013 10:00:00 PG
E-melkan IniBlogThis!Kongsi ke TwitterKongsi ke FacebookKongsi ke Pinterest