Lim Kit Siang said he might contest on PAS or PKR ticket if the ROS de-register or suspend his DAP party. 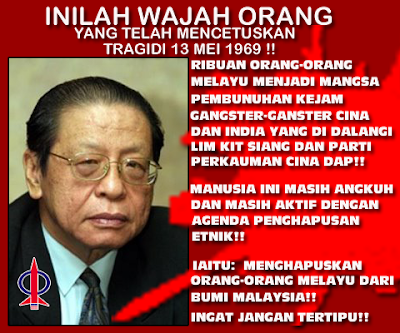 And for Lim this is not a problem as he is not thinking of philosophies and struggles…he only thinks of his survival…to win the election.

Whether he serves the constituents or not is immaterial because his constituents, mostly Chinese of course just want his voice in Dewan Rakyat to highlight their plights or problems.

Lim is expected to win anywhere he contest, of course in Chinese majority seat, as he is the voice of the community and he will not be shy to highlight even the smallest of problems faced by the community.

Some say Lim has passed his time as new leaders take over particularly in the opposition pact namely Anwar Ibrahim, who is now the opposition leader in parliament.

Anwar has taken the limelight from Lim and in fact, Anwar seems to be the man calling the shots in the opposition pact while Lim is taking the back seat with only DAP chairman Karpal Singh coming out with statements that seems to have no followers.
The scenario now is that Lim is no longer the ‘voice of the Chinese community’ as the opposition pact is no longer one party that champions the Chinese cause.

The pact is made up of a chauvinistic Chinese party that is DAP, an Islamic party that is PAS and a party that champion the cause of only one man which is PKR.
A pact that has no clear stand and philosophy that was set up when voters were angry and dissatisfied with the then Prime Minister which they called it a political tsunami.

But now as Prime Minister Najib Tun Razak engages the voters with his Economic Transformation Programme (ETP) that allow the rakyat to benefit directly from the country’s wealth, Lim or Anwar seem to have lost their importance.

Lim or Anwar can no longer say they can be the voice of resent in Dewan Rakyat as the people, and the 13 million-odd voters have no more or not much problems to be aired or raised.
Najib has in one way or another fill up the vacuum or fulfill their desires that now the Chinese community or any other community no longer need a voice in Dewan Rakyat.

Now the MPs or assemblymen are on the grounds to handle the daily problems while Parliamentarians play the role of nation building, debating issues that aim to enhance and strengthen the country’s economic development and other issues of national interests.

Thus, Lim may have miscalculated his odds when he said he would contest on PAS or PKR ticket as voters’ minds have by now probably changed
Posted by Unknown at 3/26/2013 01:00:00 PTG
E-melkan IniBlogThis!Kongsi ke TwitterKongsi ke FacebookKongsi ke Pinterest