ANWAR IS DESPERATE…ALLEGATION AGAINST NAJIB BACKFIRES 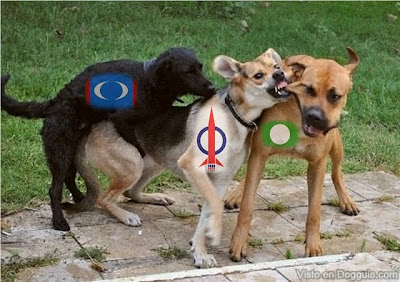 ANWAR Ibrahim’s bluff did not work…exposed by the self-styled Sulu ‘Sultan’ himself through spokesman Abraham Idjirani.

Prime Minister Najib Tun Razak did not meet brother of Jamalul Kiram 111, Bantilan Esmail Kiram 11 as alleged by Anwar following the photograph that appeared in the internet posted by of course none other than those supporting Anwar.

The reason is simple – to deflect the issue of Anwar meeting with Nur Misuari and the report from Philippines intelligence that he met Misuari few months before the Lahad Datu incursion.

Anwar’s meeting with Misuari have been highlighted openly and without any spin which worry him and PKR, added to that was PKR vice-president Tian Chua’s statements that the incursion was Umno’s made drama.
Anwar and PKR are under pressure and given the gravity of the situation where the party is losing credibility and integrity as well as support, they are now putting the blame on Najib for the incursion.

Knowing the party’s skill and expertism in spinning issues and deflecting truth to make-believed lies, they try to turn the table or the focus from Anwar and Tian Chua to Najib.

But with the denial from the Sultanate himself through his spokesman, Anwar is back in trouble and he has to find ways to get out of this.

Make-believed stories now have failed and the party is in dire straits as the pact they formed with DAP and PAS before 2008 general election has hit a snag with the two party going back to their original struggles.
DAP, being a Chinese chauvinistic party is back on its original path while PAS, back to its Islamic struggle which is now being questioned by its own members as the party leaders try to balance between true Islamic teachings and political survival with nits partners.

PKR is without any of that as it has only one objective – to put Anwar as Prime Minister – the rest are irrelevant.

And Anwar, obsessed with his ambition has, from the start surrounded himself with people who are ‘intellectual and wizard’ in spinning and creating believable stories, has been on such work to create doubts on Najib and the ruling parties as well as on Malay institutions which included the police and armed forces to win votes.

Devoid of real philosophies, he just pumps into the minds of the people all kinds of created make-believed stories that included the photo of Najib and Esmail to deflect the focus on him.

But now, with the denial, Anwar and PKR are in deep trouble because Malaysians who are concerned, regardless of race and religion are getting fed up with his antiques and lies and empty promises.
Anwar is indeed desperate and seeking anything to keep him from drowning.
Posted by Unknown at 3/28/2013 08:00:00 PG
E-melkan IniBlogThis!Kongsi ke TwitterKongsi ke FacebookKongsi ke Pinterest