What Would PAS's Members Do If PAS's Leaders Are Proven Wrong? 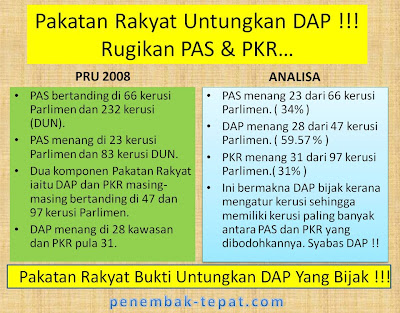 What Would PAS's Members Do If PAS's Leaders Are Proven Wrong?


If UMNO stated that the fatwas that was brought by PAS saying that 'vote for PAS, one would go to heaven', PAS would accuse UMNO of being jealous, stupid and probably kafir.
Thus, we would like to ask PAS's members, is Masjidil Haram's Fatwa Council member, Sheikh Dr. Sulaiman Saloomi is jealous, stupid and kafir for saying that fatwas that are brought by PAS is stupid? The statement was made by him in an interview with Mingguan Malaysia yesterday.
The response of PAS's leaders regarding the statement made by Dr.  Sulaiman could just be that 'UMNO had given wrong information about PAS to Sheikh Dr. Sulaiman that he somehow misunderstood the fatwas."
PAS's straight members would probably say the same to defend themselves. Other members who would have probably think before they say anything, would deny the fact that their leaders made such fatwa and they might say that UMNO was exaggerating.
What is certain, PAS's leaders and members would do just about anything to tell themselves that they are right, although it is clear that they have taken the wrong path. Ego and pride would stop them from realizing their mistakes.
Sh. Dr. Sulaiman's statement is very welcomed here in Malaysia because it seems that Muslims in Malaysia are fighting against each other because of some issues and confusion. But, the efforts in bringing them back to the right path would not be easy. All because Muslims here think that they are right even though they are heading at the wrong direction in faith, all because of their hate against the government.
Back then, Malaysian Muslims would be told by PAS to hate the government for not implementing Islamic law, which was seen as something that is kafir, but now PAS still plant their rage against the government although they had terminate the fight to build an Islamic nation when they started working alongside DAP and PKR.
It gets even sadder when PAS is not dominant in Pakatan Rakyat. Instead, they are merely followers of DAP and PKR. Whether they realize this or not, PAS is actually helping pluralist PKR and Christian Evangelist DAP to set their power in Malaysia in total through politics.
This may be hard to swallow but PAS has gone way far to the wrong direction, too far, too deep, since the 70s, and it is getting worse for the society. And in this matter, perhaps the government suffered a little out of it for not banning PAS since it was established.
Back then, PAS's slip was covered by the extreme and Muslim fanatics' image, but now it gets more clear as they are seen following the liberals who puts human rights in front of religion. From there, their leaders had to come up with contradicting statements to justify their position in the coalition.
Even though they are clearly wrong when they come up with a fatwa saying 'vote for PAS, heaven will be yours' has been around for a long time, Muslims in PAS probably want easy entrance to the paradise.
Heaven is something big, a blessing to men only for those who had done good deeds to everyone and the mother nature. Heaven is for those who is grateful for everything they have. It is not made based on laws made by men. Heaven and hell are decided by Allah S.W.T. And for that, that is why we hear stories of how a prostitute gets to go to heaven for feeding a dog and how a scholar ended up in hell because of pride.
We cannot understand how PAS members who act as if they put religion first could understand the basic things in Islam (heaven and hell) when one simply choose to go to either one of those places.
Sh. Dr. Sulaiman is not an UMNO member, not a politician and he does not represent the Egyptian government ot any other Arab nations. He is a man that speaks on the capacity of Muslim scholars who is responsible for the truth for the betterment of Muslims.
So, it is up to PAS members to either follow their leaders or to take the advice from Sh. Dr. Sulaiman to get back to reality