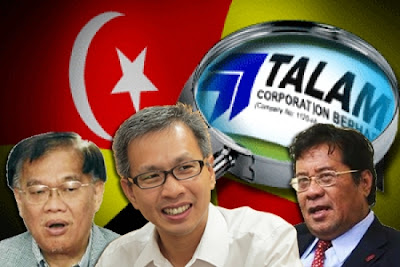 Selangor State Government wants to take over Syabas, the concessionaire company that handles water supply to Selangor and Federal Territory. Tan Sri Khalid Ibrahim said Syabas was not operating well which might result in the two states treated water supply might be rationed.

Khalid also called for the expulsion of Syabas’ CEO and chairman Tan Sri Rozali Ismail, claiming with the expulsion Syabas would save some RM5 million in the expenditures – obviously the salaries of the two.

What Khalid is doing right now is diverting the attention of the public at large and voters in Selangor on the issues which he had yet to resolved and is finding difficulty in coming out with the right answers.

Talam Corporation issue and the state’s unfulfilled promises to voters are haunting him and the state government he leads since the past two years and the report card he has to show for the coming general election is bad – in the red.

The Talam issue has put him in a corner where he could not even come out with the promised ‘White Paper’ that is supposed to ‘tell all’ or ‘reveal the truth’ of the whole episode.

Khalid is in a fixed how to explain the episode where he had sold land cheaply after buying them at high prices from Talam, which involved several assets that the state government had in possession since the Barisan Nasional (BN) days but now lost to Talam.

And Talam, which was in the red, has suddenly turned its bottom-line blue after the deal, a ‘magical deal’ that see Tan Sri Chan Ah Chai smiling to the bank, leaving behind Khalid to face the ‘firing squad.’

Despite backed by DAP’s so-called economic expert Tony Phua in the attempt to ‘clear the air’, BN’s MCA rapid demand on answers and White Paper has placed the PR state government in a corner and any deviation or digression on the issue has failed to dampen the demand.

Khalid can smile and talk about other issues such as the Syabas issue to take away the attention on Talam, MCA’s consistent attack and deman on Talam issue may well have Khalid ‘hiding in shame’.

Only the White Paper can clear the PR state government on any accusations of ‘selling out’ to Talam and without it, BN’s MCA has indeed ‘hit the Achille’s heel’ of Khalid and the state PR government.

Thus, it is up to Khalid to thwart off the attack on the issue as diverting it seems to be futile as every issue he raises to divert the focus on Talam, goes back on him as he has his fingers stuck in everything.

Even the Syabas issue has been interpreted as Khalid wanting to have his own men in to make it easier for him to manipulate when the need arises, said some observers.

Adding to Khalid’s Talam issues, demand to make good promises made during the 2008 general election has been an ongoing events where voters, particularly the low-income group and small entrepreneurs held demonstrations to voice their dissatisfactions.